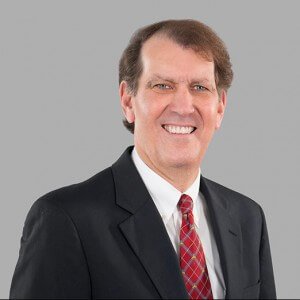 David D. Ward is the Co-Chair of the firm’s Medical Malpractice Practice Group. He comes from a family full of medical practitioners and has completed the course to be an emergency medical technician. In his practice, he represents hospitals, physicians, nurses, and other medical providers in medical malpractice actions. If you ask David why he practices law, he will tell you: to help people. Specifically, he practices to help healthcare providers get through the very difficult times they are going through as a result of a medical malpractice lawsuit. He strives to make every effort to keep his clients informed of what is going on and what is coming and to make sure they understand the step-by-step process of a medical malpractice lawsuit. Away from his job, David enjoys working on Habitat for Humanity houses, traveling, and being outdoors.… Read More

David D. Ward began his litigation career in 1975 and developed valuable trial experience as an Assistant District Attorney in Wake County while honing his trial skills prosecuting criminal cases.  After four years in criminal court, David transferred his law practice to civil court, and for more than 25 years his practice has been exclusively devoted to the defense of medical malpractice actions.

David comes from a medical family.  His father is a general surgeon and both his brother and uncle are internists.  David represents physicians, nurses, large teaching hospitals, small community hospitals, outpatient surgical facilities and other healthcare providers.  David handles cases in both federal and state courts.

David was elected to membership in the American Board of Trial Advocates (ABOTA).  He also maintains an AV rating with Martindale-Hubbell, a peer review rating which recognizes attorneys who have reached high levels of skill and integrity.  He has been listed in the publications “The Best Lawyers in America®” and “North Carolina Super Lawyers®” multiple times in the areas of medical malpractice law and personal injury litigation.

David Ward retired from private practice in May of 2019.

Cases or matters referenced do not represent the lawyer’s entire record.  Each case is unique and must be evaluated on its own merits.  The outcome of a particular case cannot be predicated upon a lawyer’s or a law firm’s past results.