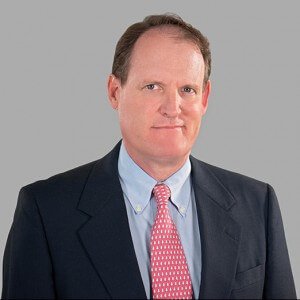 A native North Carolinian, Taylor grew up in Greenville with strong roots in the medical profession as the son and grandson of physicians. Taylor graduated Phi Beta Kappa from undergraduate school at UNC-Chapel Hill and earned his law degree there three years later. He has defended workers’ compensation claims for more than 28 years in almost all of North Carolina’s 100 counties. As one of the original partners of CSH, Taylor has held leadership positions in the firm since its inception. He currently serves on the firm’s Management Committee and is the Chair of the firm’s Workers’ Compensation Group.… Read More

Taylor Pace has been practicing workers’ compensation in the firm’s Raleigh office since the inception of the firm. He was one of the original partners who founded the firm, and co-chaired the Workers’ Compensation Practice Group for 20 years.

During the first several years of his practice, Taylor was involved not only in the defense of workers’ compensation claims before the Industrial Commission, but also in the defense of general civil litigation Superior Court matters, trying jury cases to verdicts in the areas of automobile negligence, products liability, and premises liability.

When the North Carolina Bar Association established its Workers’ Compensation Section in 1995 (which is now comprised of more than 600 attorneys), Taylor was selected as one of the original 15 attorneys to serve on the Section’s governing counsel.

Taylor has tried to a final decision well over a hundred litigated cases before the North Carolina Industrial Commission, involving a wide variety of disputed issues including jurisdiction, injury by accident, occupational disease, disability, medical causation, liens, and employee fraud.

Twenty-six attorneys from Cranfill Sumner LLP (CSH Law) were recently selected by their peers for inclusion in The Best Lawyers in America© 2022.… Read More

Twenty-seven attorneys from Cranfill Sumner LLP (Cranfill Sumner) were recently selected by their peers for inclusion in The Best Lawyers in America© 2021 (Copyright 2020 by Woodward/White, Inc., of Aiken, SC).… Read More