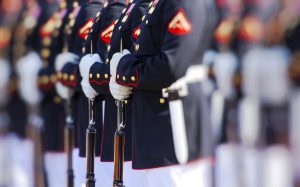 What Happened at Camp Lejeune?

Camp Lejeune is a United States Marine Corps Base located in Jacksonville, North Carolina. If you or a loved one resided or worked at the Marine Corps base at Camp Lejeune North Carolina between August 1, 1953, and December 31, 1987, you may be eligible for financial compensation. During that period, approximately 1,000,000 people including active-duty marines, veterans, their families, and civilian workers were exposed to water containing toxic volatile organic compounds (VOCs) that can cause cancer, congenital disabilities, and other serious health conditions.

The water contamination and toxic chemicals were first discovered at Camp Lejeune in 1982.  However, The Agency for Toxic Substances and Disease Registry (ATSDR) did not begin examining health risks associated with Camp Lejeune’s water until the late 1980s. In addition to exposure caused by drinking the water, several other factors also need to be considered such as:

The reason you may have a claim is that Congress recently passed the “Honoring our PACT Act of 2022” which contains, among other provisions, a new Federal Cause of Action referred to as the Camp Lejeune Justice Act of 2022.  This truly extraordinary legislation provides new causes of action and procedures for pursuing those claims, for people injured because of exposure to certain toxic chemicals at Camp Lejeune.

On August 10, 2022, the United States government passed a law called the Camp Lejeune Justice Act of 2022 allowing an individual or legal representative to bring an action in the United States District Court for the Eastern District of North Carolina for harm that was caused by exposure to the water at Camp Lejeune. However, if you have filed in the past, you must refile for reconsideration.

No, you will not jeopardize your current benefits if you file a claim under the Camp Lejeune Justice Act.

You only have until August 10, 2024, to initiate your claim, so it is important for you to act now.

Cranfill, Sumner is a North Carolina-based law firm that has been serving clients for over 30 years. Since 1992, the firm has been built on the foundation of Teamwork, Reputation, and Client Service.  We have offices in Raleigh, Wilmington, and Charlotte, and try cases all over North Carolina in State and Federal Court.  Unlike some of the National firms, you will not be directed to a call center or intake personnel; you will be able to speak directly with one of the attorneys who is working on your case.